The Dingling Tomb Ding-Ling is the only tomb of the thirteen to be exacavated. Buried here are three individuals; Emperor Wan-li (died 1620), Empress Wang (died 1620), and another Empress Wang (died 1611). The Emperor Wan-li was the last of the great Ming Emperors, reigning 48 years, longer than any Chinese Emperor since the Han Emperor Wu of the 2nd century B.C. Alongside him are his wife and 1st concubine.

The excavations took place from 1956-58 under the direction of Dr. Hsia Nai of the Peking Institute of Archaeology. Though despoiled by vandals, the burial chambers were undisturbed. The archaeologists’ first priority was to find the door to the tomb chambers. Random digging could have collapsed the tomb chamber, so the exit door door had to first be located. Fortunately, luck was on their side. A stele left by the original builders was discovered with the inscription “the wall is 16 chang away and 3.5 chang down.” It had been left by workers who had simply forgotton to remove it when the tomb was sealed. The archaeologists followed the instructions and discovered a door in the proper place. It was sealed with an ingeneous lock that had swung into place when the doors were originally closed. The archaeologists removed it by inserting a pole between the cracks and lifting it off its hinges.

Inside, nothing had been disturbed since the tomb was sealed in 1620. It was completely dry. An enormous variety of treasure lay in the inner rooms. The vaults were self-supporting with carefully fitted marble stonework. Adjacent to the treasure and the three bodies were “eternal lamps” to sustain the spirit of the dead, filled with oil, which had gone out soon after the doors were sealed. 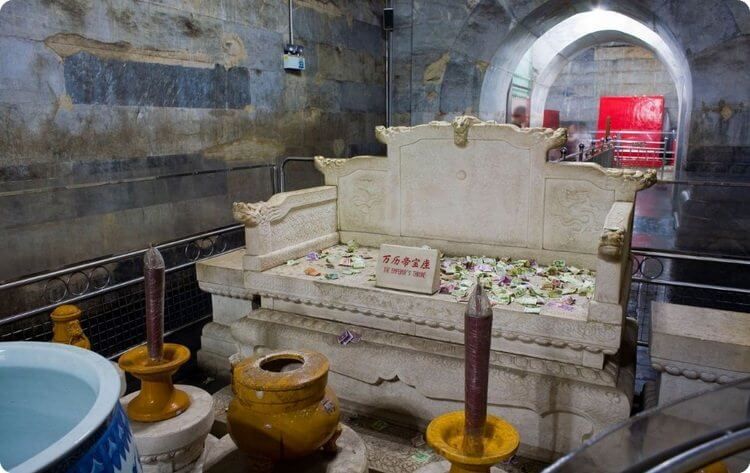 Unfortunately, most of the artifacts have been removed from the inner chambers, so that there is little left to see when one visits today. Also, the underground chambers are accessable from an ugly modern staircase, which partly spoils the experience.

The outdoor structures of the tomb are far more interesting, with beautiful views of the surrounding mountains from the Stele tower. Though crowded with visitors, the far reaches of the circular wall are devoid of people. From here you can be alone and enjoy the natural beauty of the tomb landscape, listening to the songs of the native birds.